Nineteen-year-old Aldo Novel Adilang from Sulawesi worked as a lantern keeper on a floating fish trap, also known in Indonesia as a “rompong”. The fish rafts are usually located 125 kilometers out at sea. The young man had the responsibility to light the lamps on the raft, which were designed to attract the fish. But because of heavy winds, the rope that was anchored on the seabed was snapped, and sent the fishing raft into the open sea. 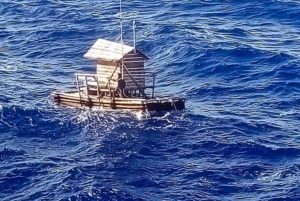 The small wooden fishing hut was one of 50 owned by a fishing company. These huts are spread across the waters of the region of Manado. Each week, someone from the fishing company would visit the raft and harvest the fish from the traps, as well as provide Adilang with fresh supplies of food, water, and fuel. But when it was time to visit the raft that Adilang was in, he was nowhere to be found. 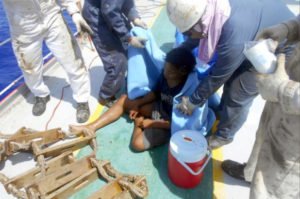 The teenage boy only had a few days of supplies left, but he survived by catching fish, burning some wood from the hut to cook them, and sipping seawater through his clothes to minimize salt intake. At least 10 ships sailed past the boy, but none of them saw him. He drifted in the ocean for 49 days before he was finally rescued by a Panama vessel, the MV Arpegigio, in the waters of Guam.

“Every time he saw a large ship, he said, he was hopeful, but more than 10 ships had sailed past him, none of them stopped or saw Aldi,” said Fajar Firdaus, an Indonesian diplomat from the consulate in Osaka. After Aldi was rescued, the ship headed to Japan, where he flew back home to Manado. He has reportedly recovered from his experience and is in good health.