An alligator in Scottsdale, Arizona was nicknamed Mr. Stubbs because of a missing tail. But thanks to a team of vets and researchers, this alligator may get a tail with the use of a prosthetic limb. According to the researchers in a marin animal shelter, Mr. Stubbs may have lost his tail to another alligator in a fight. Losing a tail is a very big deal for alligators, especially when it comes to swimming and catching its prey. 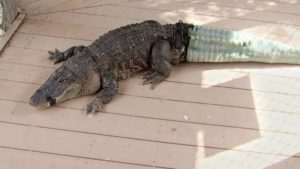 “If he is in a pen with other alligators he can’t move as quickly, so they get to the food first,” said Dr. Justin Georgi, an associate professor at Midwestern University. Alligators use their tails to balance themselves. They also use their tail so that they can walk and keep their head up at the same time. The lack of a tail made it difficult for Mr. Stubbs to move quickly. 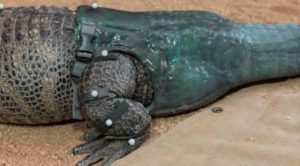 “When we first got him, if the water was too deep for him to touch the bottom, he would roll over onto his back and could not right himself,” said Russ Johnson, president of Phoenix Herpetological Society, where Mr. Stubbs is currently placed. And it isn’t just about getting up quickly. Without a tail, there is a chance that the alligator could drown. So a team led by Dr. Georgi developed a new tail for the crippled alligator. It took a while for Mr. Stubbs to adjust, but he seems to be getting the hang of it.

“After almost eight years, we need to ‘unteach’ him the dog paddle, so he can swim like a normal alligator,” said Georgi.