Adult Man Serves as Flower Girl in His Cousin’s Wedding 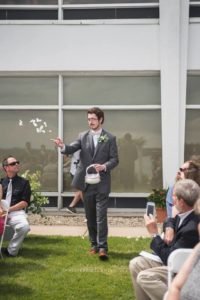 At the time, Andria was just three years old and Casey was five, but they had already made plans. They were close cousins, much like most of their family. Years laterÂ Casey had the good fortune of meeting the future groom, Jake, at a Butch Walker concert. When Jake and his cousin Andria got together, Casey started lobbying immediately to be the couple’s flower girl at their wedding. According to Casey, he was ecstatic when he found out it was made official. 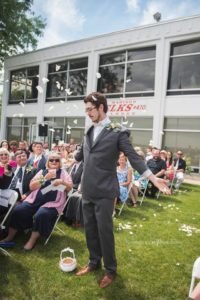 “There may have been some skeptics when the ceremony started, but I think everyone was on board with the idea after I set the flower basket (the same one Andria used in the wedding we were in together as children) down at the end of the aisle, pulled out flower petals I had stocked my pockets with and threw them in the air in the style of a LeBron James powder toss. There was an ovation. I only wish I had remembered to use the flower petals I had stuffed in one of my shoes! Maybe next time. In any case, the whole thing was approved and encouraged by Andria and Jake. I never would never have taken any attention away from them if they didn’t want me to!”