Accountant Gets the Call To Play Pro Hockey

Scott Foster has always wanted to be a professional hockey player. But life took him to a different path and now he works as an accountant during the day and just plays goalie in some minor leagues at night. But earlier this week, his dream came true when the Chicago Blackhawks of the NHL called him up to play for their team just in case their third-string goalie got injured. 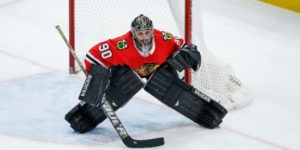 Foster was included in the game last week against the Winnipeg Jets, but no one really expected the 36-year old accountant to play any minutes. But then the starting goalie Anton Forsberg suffered an injury during pre-game warm-ups. The back-up goalie played well enough as a first half replacement, but had to leave in the third period with a lower-body injury. That’s when Foster got to call to play in an official NHL game.

In his very first game, Foster was defending the goal against the top scoring teams in the league. In his 14 minutes of play, Foster was able to keep the Jets scoreless. The sold out crowd at the United Center in Chicago appreciated Foster’s effort and even chanted “Foster! Foster!” after each save. 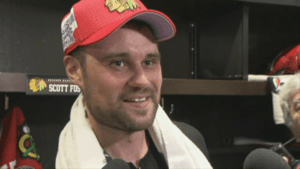 “I think I’m just hitting my prime,” Foster said in an interview with the Chicago Sun-Times. “The initial shock happened when I had to dress. And then I think you just kind of black out after that. I’m an accountant by day. So a few hours ago I was sitting on my computer typing on the 10-key, and now I’m standing in front of you guys just finished 14 and a half minutes of NHL hockey.”