A Chinese restaurant in London specializes in providing unusual and exotic dishes. One of their most popular dishes includes a dish with 16-foot long noodles. The dish comes from the Shan Xi region of China, more popularly known as the home of the Terracotta Army. The noodles have gained notoriety, with several customers posting the long noodle dish on their social media accounts. 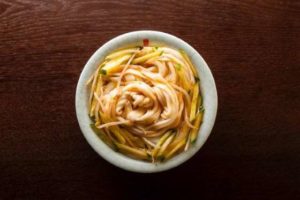 The restaurant is found in London and is called Murger Hanhan. One of the signature dishes of the eatery is the “Murger”. The Murger is the equivalent of the American hamburger, and it is known as the world’s oldest sandwich, dating back to the Qin Dynasty. But it isn’t the Murger that has been grabbing people’s attention. Rather it is the infamous hand-pulled noodles.

The chefs and cooks at Murger HanHan make their noodles fresh every day. They start early in the morning and start hand-pulling the noodle when it is ordered. The target is to get the noodles to be 16 feet long. The noodles are then served with the guest’s preferred sauce, soup, or topping. They can choose their preference from the menu. The noodles are made with wheat rather than rice, much like the traditional noodles. 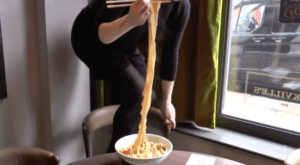 The restaurant also offers Extra Wide noodles, which are still hand pulled, but they are not split before cooking, so they are twice as wide and half the length as the other noodles. Murger HanHAn is also the only restaurant in Europe that serves traditional drinks from Xi’an City such as Ice Peak Orange Soda and Xi’an Rice Wine.