97-year old Jack Hopkins recently visited a preschool to show off his collection of harmonicas that took him nearly a century to compile. He’s been playing the harmonica for the same amount of time and it is something he wishes to pass on to the next generation. Hopkins says he does not know how many harmonicas he actually owns, but he is certainÂ that there are at least 15 different types of harmonicas in his collection. 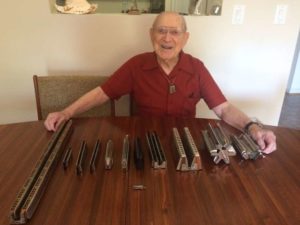 Aside from your garden-variety harmonica, Hopkins owns harmonicas that are 2 feet long and harmonicas that are just 2 inches long. Hopkins shared with the children at the preschool that he prefers harmonicas because they are small and convenient and that it is a musical instrument capable of expressing emotions. Hopkins has played his harmonica at the Kennedy Center with the opera house orchestra, but nowadays he only plays it in church, where he also sings in the choir. 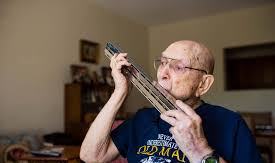 The teacher at the Lake Ridge Baptist preschool, Jenny Struck, said she appreciates Hopkins was willing to share his talent and collection with children. She met him a few years ago and invited him to speak at another school where she had previously worked. She says for a man that is close to 100 years of age, he still has a lot of energy, especially when talking about his harmonicas. Hopkins has had a full life. Aside from his harmonica collection, he is also a World War II veteran, he has worked for the army as a civilian, and he is a retired mechanical engineer. He also has seven children and seven grandchildren.