94-year old Keith Davison decided to do something that would bring laughter and smiles to his local community. He had just lost his wife, but he wanted to do something for the people that were still in his life. So he built an in-ground pool in his very own backyard and invited all the kids in the neighborhood to play there. Davison even kept the pool open the entire summer for the kids. 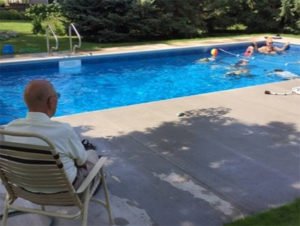 Davison is a retired judge from Morris, Minnesota and spent most of his retiredÂ time with his late wife. They were married for most of his adult life, a full 66 years. Â He said he missed having people around so he decided to build the pool for the kids in his neighborhood. The pool is not just a small watering hole either. The swimming pool he built is 32 feet long and the deep end goes as deep as 9 feet, to accommodate the diving board. The kids have loved the pool, especially since there isn’t an outdoor public pool near the area. 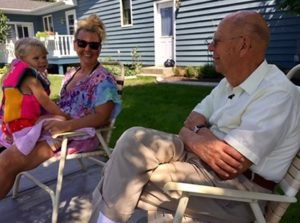 “It’s him spreading joy throughout our neighborhood for these kids,” says Jessica Huebner, a neighbor of Davison “(He) kind of adopted our whole neighborhood of kids, these are (his) grandkids.” Another neighbor says that he doesn’t mind the intrusion, even if the kids visit the pool every day. But Davison says that the pool isn’t entirely just for the kids. He says that when the kids have gone home, he enjoys a dip in the swimming pool himself.