In Ohio, a 9-year old boy was able to live his dream of being a CEO of a large company. The Make-A-Wish Foundation had contacted 9-year old Adrian McKinney II that his wish was granted by the organization. McKinney was then flown out to an all-expenses paid trip to Hawaii with his family. After the trip, Adrian attended a gala where he met the CEO of the foundation. That’s when arrangements were made for him to be a CEO for a day. 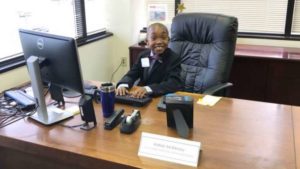 McKinney suffers from sickle cell anemia, and he had to recover from bone marrow transplant before he and his family was able to go on the trip to Hawaii. At the Gala, McKinney met Doug Kelly, the CEO of the Make-A-Wish Foundation. It was there that he was told that he could have Kelly’s job for a day. On his day as a CEO Adrian was driven to the corporate headquarters where he had his very own office. During the day, Adrian gave a speech to his employees and even led a staff meeting. 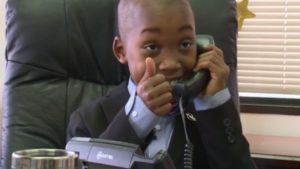 “For the first five years of his life, it was just constant worry, anxiety, just living on edge of just worry, of something going wrong, of him getting really sick,” said Torie McKinney, Adrian’s mother, “Just to be relieved, and have Make-A-Wish come and make his wish come true, not only one time, but two times, we’re just grateful.” Torie says she is extremely grateful that her son received the opportunity and had his biggest wish come true. Employees at the office said that Adrian did such a good job as CEO that he may just give Kelly a run for his money.