In New Quay, Wales, an 8-year old boy saved a few people from a rough stretch of water along the coast. It takes courage and a willingness to help strangers to do that, and it is even more impressive at such a young age. That in itself is an achievement that he can be proud of for the rest of his life. But then just 48 hours later, the same boy saved another group of people along the same spot on the coastline.

The young boy’s name is Steffan Williams. He was kayaking along the shore when he spotted three tourists stranded on a rock. Williams then returned with his rubber dinghy and towed the stranded tourists back to shore. Then just two days later, Williams saw two teenagers stuck on the same rock, whistling and waving to get his attention. Williams fetched his dinghy again for another rescue. Williams often paddles close to shore on his kayak as his mother watches from the shore. Staffan says that he hopes to join the lifeboat crews just like his dad when he is old enough. 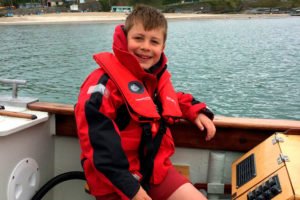 “He’s really confident on the water â€“ he loves to go out on his kayak. His big ambition is to be on a lifeboat crew.” said Huw Williams, Steffan’s father, “The first time, with the elderly woman and the teenagers, he could’ve stood up in the water, it would’ve been up to his neck. The second time was much more serious. The two boys were staying in the holiday park â€“ that’s what tends to happen, people walk to town across the beach and don’t realize the tide is coming back.”