Jake Vella, an 8-year old boy from Malta, suffers from a very rare condition called ROHHAD (rapid onset obesity with hypothalamic dysregulation, hypoventilation, and autonomic dysregulation). The hormonal condition makes Jake gain weight even if he keeps a healthy diet and exercises regularly. For most kids, exercise is a way to stay healthy and have fun, but for Jake, he exercises and eats healthy to stay alive. 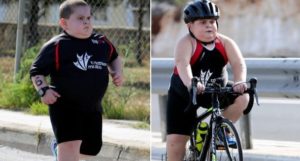 Less than 100 people have ever been diagnosed with ROHHAD. For those that were diagnosed with the condition, all of them did not survive past their 20’s. The condition affects the nervous system, specifically the part that controls the involuntary actions. The condition an lead to other complications such as irregular heartbeat and excessive sweating. Jake was diagnosed with his condition when he was just a baby. Despite the odds, his parents still wanted him to have a normal life. 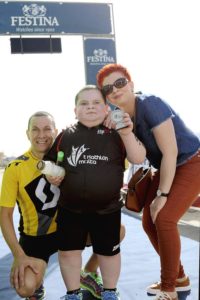 His mother, Maruska, said: ‘Triathlons help Jake to keep fit and active. It’s good for his health and also gives him a chance to socialize with other kids. He leads a normal life, goes to school, plays the drums, but he has to be very careful not to get sick and we are frightened that a simple flu could lead to other complications. He trains with the Malta Youth Triathlon Association three times a week, and it really is like a second family to him. All the other young athletes and their families are so supportive of Jake, and they are the first ones to cheer him across the finish line.

Despite the hand that fate has dealt him, little Jake refuses to give up. He trains thrice a week for triathlons and eats healthy all the time. His dreams of one day meeting UK’s own triathlon champions: Olympic athletes Alistair and Jonny Brownlee. Little does Jake know that he has become a hero in his own right and has inspired thousands of people around the world with his bravery.