Earlier this month, 8-year old Roxy Getter, became the youngest girl to climb the famed Kilimanjaro Mountain. Roxy climbed the mountain with her family which included her parents, who are veteran hikers, and her older brother, 10-year old Ben. The family was vacationing from Punta Gorda, Florida and climbed the mountain during a family vacation to Tanzania. 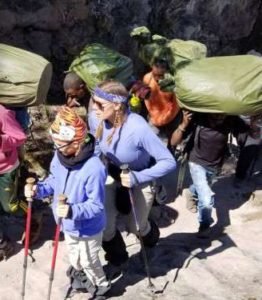 Roxy said that it was “pretty cool” that she was able to get to the top of the mountain. According to her father Bobby Getter, she didn’t stop or complain all the way to the top. Getter says he was surprised that his daughter was able to do it but he was very happy for her. Getter originally wanted to sign his family up for a safari but a friend suggested they take the hike up to Mount Kilimanjaro. Getter was hesitant because while they did a lot of hiking while they lived in Arizona, they didn’t have that much opportunity to hike in Florida. 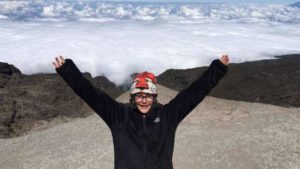 “It’s dark, it’s cold, it’s windy, you’re dirty, you haven’t showered in a week, you’re sleeping in a tent,” Bobby explained. “The people that were there with us, they wanted us to make it, you can tell. They kept us positive all the way up, you know, singing, talking to us, chatting. When we reached the summit, I was emotional at that point because I really couldn’t believe that they did it as well as they did.”

“We weren’t sure if we could do it or not but we all got together as a family and pushed towards it and made it to the top,” said Sarah Getter, the mother of Roxy. “From that experience, I think we’ve learned a lot of lessons, especially for the kids: Keep going, even when things get hard.”