Earlier this week, honey oozed from a hospital ceiling and led to the discovery of more than 60,000 bees in the walls. The swarm of bees seemingly made a hive in the roof of the hospital building. A few of the bees were seen flying in and out of a building, but no one thought that a swarm that big was inside the roof of the structure. 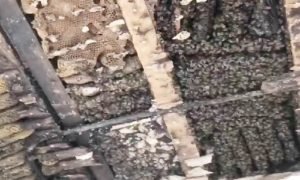 The staff at the Fulbourn Hospital in Cambridge, first noticed that something was wrong when honey began to seep out of gaps when a porch roof panel was removed earlier this month. They called in experts to inspect the building and they found a large infestation of bees. The Tree Bee Society was called in and it took 12 hours to remove the bees from the building. Luckily the building was just for staff and did not have any patients inside. 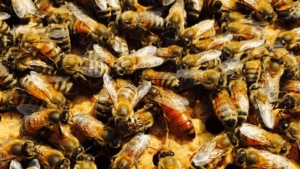 It is believed that the bee hive had been in the roof of the building for several years. A video was posted to the Tree Bee Society’s Facebook page. It showed large slabs of honeycombs covered in bees. According to the Society, the bees were relocated and they would live in a field at their headquarters in Lancashire. The Cambridgeshire and Peterborough NHS Foundation Trust thanked the Tree Bee Society for their help. They implied that incident had actually caused “quite a buzz”.

“We were amazed when we saw how many bees were in the loft space of the porch – to see the size of the colony was incredible.” said Garry Locke, from the Foundation.