In Indiana, 11-year old Phil Mick was about to attend the first day of class, but he was afraid of the bullies that had been tormenting him from school. So the 6th grade boy had some company entering the school. Mick was escorted to his school by 50 bikers. Their message clear and simple; they were there for Phil and they would not tolerate any more bullying. 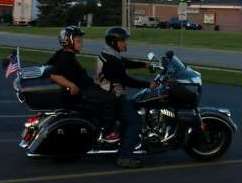 More than 50 bikers from the KDZ Motorcycle Sales and Service in Auburn came together in making sure that little Phil was able to enter school and also sending his bullies a message. According to Phil Mick, he was bullied throughout his elementary school days, so this year, his friend and biker, Brent Warfield wanted to make sure that the bullying would stop. Warfield invited all of his biker friends in a social media post, where several bikers responded. The morning started with breakfast with all the bikers that volunteered to help, then after the morning meal, all the bikers would be escorting Phil to school. 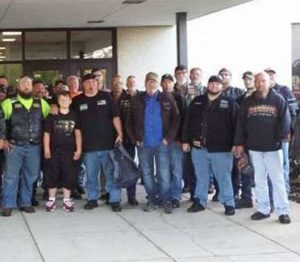 “Some rode up [from] even an hour away to be here,” said Warfield. “We just wanted to come together as a big community and help Phil to show him that we’re there to support him during this rough time. He goes to school happy and comes home happy. That just makes us feel so great.” Phil’s mother Tammy, says she was amazed by the love and support that Phil was able to get from his friends and the community. She calls the biker’s her son’s guardian angels.