3-Year-Old Loves The Vegetable Aisle at the Supermarket

Mason Reese is a three year old that absolutely loves his vegetables. In fact, when the family goes to the supermarket to get groceries, he loves to spend most of his time at the vegetable section. Not only does he spend most of his time in that part of the supermarket, but he can even name his favorite fruits and vegetables. This Pennsylvania family definitely does not have to worry about their kids finishing their veggies. 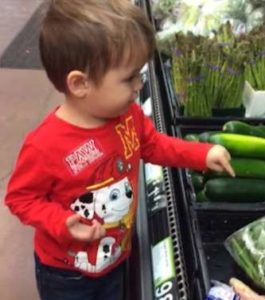 Mason was diagnosed with a rare food allergy when he was just a baby. The allergy is called FPIES, and when not monitored closely, could lead to severe health consequences. At 5 months, baby Mason was not able to eat most of the foods that babies are fed, so he was mostly fed fruits and vegetables. Mason has since kept the habit, despite being cleared of FPIES last year. And he just loves the many vegetables that are in display each time they visit the supermarket. He can name several of the fruits and vegetables that in display, from apple all they way to zucchini. 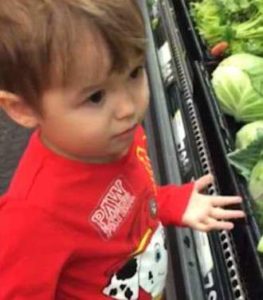 “We just walked into the store, and he saw the veggies and his eyes lit up,” says his mom 30 â€“year old Lianne Reese. “He said, ‘We’ve got to go over there (the vegetable section). He’ll eat a lot of things that you wouldn’t expect a kid to like.” According to his mother, Mason’s most recent favorite has been the broccoli, but his all time favorite vegetable to eat and play with is Brussels sprouts on the stalk. But for those that are concerned, Mason has a very balanced diet with proteins and even sugar. But just like any parent, Lianne tries to limit their 3-year old’s sugar intake.