25-Foot Statue of Jeff Goldblum has Appears in London

Earlier this week, Londoners got a big surprise one morning when they saw a giant 25-foot statue of the actor Jeff Goldblum just outside Potters Field in London. The statue was of the actor lying down on his side, propped up by an elbow, with his shirt mischievously wide open. It was placed in the field with the iconic Tower Bridge of London in the background. 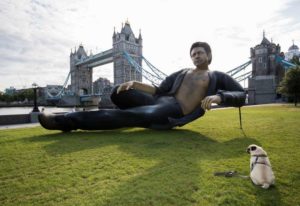 The statue was put by NOW TV in celebration for the 25th anniversary of the movie Jurassic Park. The tribute was for one of the more famous scenes of Goldblum, who played Dr. Ian Malcolm in the movie. The scene sees Goldblum resting and mending his injuries (that’s why his shirt was open) after almost being eaten by a T-Rex. The statue was measured at 25 feet and weighed 150 kilograms. It took six weeks and more than 250 hours to build the massive statue. The event has since gone viral with several people tweeting a photo of the giant Goldblum with hilarious comments and descriptions. 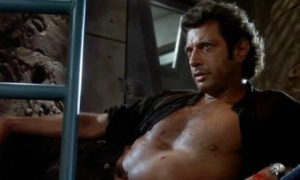 “Sometimes I hate how bonkers we are as a nation, today though, we have a giant shirtless Jeff Goldblum statue. EMBRACE OUR INSANITY!” said one local on social media.

The 1993 film Jurassic Park has been one of the most successful movies of the time and has spawned four sequels. Earlier this year, Goldblum reprised his role as Dr. Malcolm in the latest Jurassic Park sequel, Jurassic World: Fallen Kingdom.