Earlier this week, news spread online about how a 2-week old piglet came to aid of her kitten friend during its time of need. The piglet, named Batman, was captured on video snuggling up next to his kitten friend named Sriracha. Sriracha has a neurological disorder called cerebellar hypoplasia which causes her to have seizures. It was during this time that the orphaned piglet lay down by his friend for comfort. 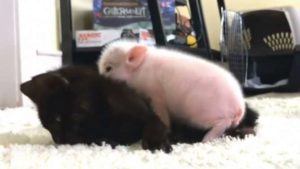 Both Batman and Sriracha live at the Rancho Relaxo animal rescue located in Woodstown, New Jersey. The video, which has gone viral, clearly shows Batman comforting his friend as the kitten goes through an episode of seizures. The video was posted on Instagram where it has been shared and reposted hundreds of times. The condition of Sriracha causes her to have seizures but it also affects the way she moves and her balance. During the seizures the cat can be seen shaking. 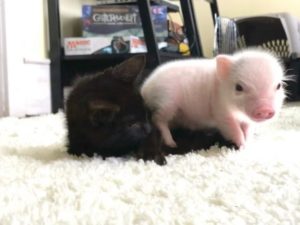 That’s when her friend, little Batman, came over and cuddled next to his friend in support. While there is no cure for the condition of the cat, each episode does not cause the feline any pain or discomfort. The cat can actually live a full and normal life despite having this brain condition. This helpful information has spread through social media thanks to the friendship shown by Batman the orphaned piglet.

“He has been extra attached to Sriracha today,” says Caitlin Cimini, the founder of the animal rescue center. “I swear he knows she has had a bad couple of days and feels the need to comfort her.”