Woman Loses Wallet With $1600 Then Gets Message on Facebook

In Hawaii, Shayne Keliiholokai was out buying a few items at a local drugstore. When she was about to make a purchase at the counter, she found that she did not have her wallet with her. She realized that she must have left her wallet at a cart when she was shopping at Walmart just a half hour before. She rushed back to the Walmart but her wallet was no longer there. 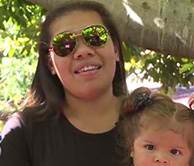 It was a devastating loss for Keliholokai. Aside from losing all her IDs and medical cards for her kids, she also lost $1,600 in cash. This was because it was payday where she worked. Keliholokai said she doesn’t usually carry around that kind of money, but she had cashed in most of her paycheck to pay the rent the next day. She thought all hope was lost. But then later on that night, there was an unexpected surprise waiting for her. Keliholokai logged on to Facebook and received a message from a woman saying she had found her wallet and that she was trying to return it to Shayne. The next day, the two women met and the kind lady returned her wallet, with everything still inside, including all her cards and all her money.

“I was so thrilled. My heart was racing so fast,” said Keliholokai. “I tried to reward her, everything. She didn’t accept my reward. She just took a thank you and a hug, and we became friends.” Shayne says that this generosity has inspired her and she plans to pay it forward.