Three world class marathon runners were commissioned by Nike and prepared to complete a marathon in less than two hours. The three runners were Lelisa Desisa, Zersanay Tadese, and Eliud Kipchoge. These three professional runners were what formed Nike’s ‘Breaking 2’ team. The three started with a strong start but as the race progressed, both Desisa and Tadese dropped off the pace, with only Kipchoge within range to break the record. 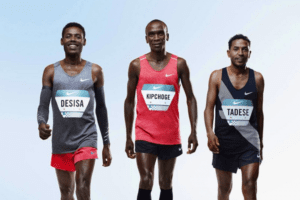 The three runners that were picked had several accomplishments and accolades. Desisa was a 2-time winner of the Boston Marathon, Tadese currently holds the half marathon world record, and Kipchoge was the winner of the 2016 London Marathon and a 2016 Olympic Gold medalist. The race was run on the Monza track near Milan, Italy. The course was a 2 kilometer loop with wide turns and long stretches of straight road. It would take 17 loopsÂ around the loop to get the full distance of a marathon run. 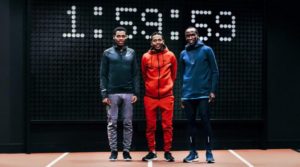 Before the event, the marathon record was 2:02:57. This mark was made by Dennis Kimetto of Kenya at the 2014 Berlin Marathon. The two-hour mark has been the golden standard as the world record for marathon runners. The last time that a competitor had come closer than three minutes of 2 hours was back in the 1950’s. Running a 2-hour marathon can be achieved by running 13 miles an hour or 4:34 each mile. It is a difficult pace to maintain, even for the three accomplished runners such as these. Kipchoge was within 24 seconds of breaking the 2-hour mark. But because the Nike organizers used pace runners, his time was ineligible for a world record.