16 Nurses in Same Hospital are Pregnant At the Same Time

In Arizona, a hospital experienced one of the weirdest baby booms. This was because the pregnant women weren’t patients, but rather nurses that worked there. Coincidentally, sixteen nurses that work at the intensive care unit at the Banner Desert Medical Center in Mesa, Arizona are all expecting. These nurses are expected to give birth between October and January. 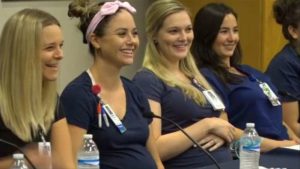 Nurse Rochelle Sherman, who herself is eight months pregnant, said that they didn’t realize how many of them were pregnant until they started a Facebook group. The nurses of the hospital who were not expecting were also in the group to help out with the scheduling and the assignments. Those that were not pregnant took the patients who had illnesses or treatments that could be dangerous for pregnant women or their unborn children. These include chemotherapy, shingles, and tuberculosis. 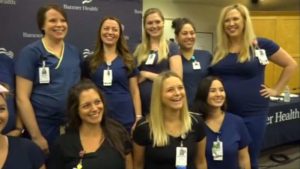 They also coordinated how to work out the schedule since so many of them will soon be on maternity leave for the next two to four months. The officials at the hospital have also said that a group of relief nurses are available to cover the workload when the 16 nurses would take each of their leaves, which could last as long as 12 weeks. On the brighter side of things, the group also allows the nurses who are pregnant to share their experiences and help each other out with their pregnancies. Other nurses simply smile or jokingly roll their eyes when these expecting nurses get to talking about babies and pregnancies.