A 13-year old entrepreneur is making a splash in the candy industry with her newest lollipop inventions. Aline Morse has invented lollipops that are sugar-free. They are made with sweeteners erythritol and xylitol, which actually reduce the acidity in the mouth and they have been found to actually protect the teeth against cavities. 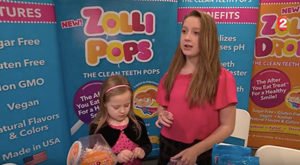 Morse launched her brand Zolli Candy when she was just 9 years old after visiting a bank with her father. Her father urged her to think about getting the free lollipops that were offered for free in the bank, because it was bad for her teeth. This made her think about why sugar was bad for her health. After doing some research, she decided to make her own healthier candy.

Zolli Candy offers lollipops, candy drops, and taffy in several flavors. They are all made with the special compounds that fight cavities. Not only is the candy sugar-free, but they are also good for people that have food restrictions or allergies. The candies are gluten-free, non-GMO, vegan, dairy-free, organic, and they are even kosher. They have plant-based dyes and natural flavors. 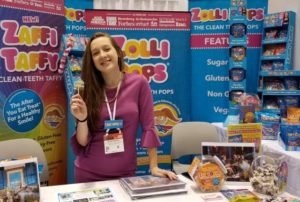 It also helps that the candies taste good. Zollipops have become best sellers on Amazon, and they have even beaten out top candy produces such as Tootsie and Blow Pop. Some parents have posted reviews that rave about how the lollipops helped keep their kids’ teeth clean. Morse also became the youngest person to appear on the cover of Entrepreneur magazine in recognition of her candy company.

“Consumers are realizing there is way too much sugar in their diets but we still want to have treats,” said Morse in a statement. “And with Zolli Candy, we are giving consumers what they want: guilt-free treats.”