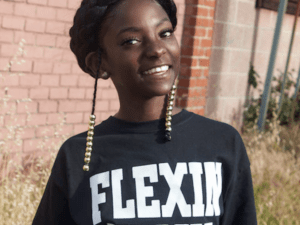 Rogers says that she was inspired to create her own clothing line when she was in first grade. There were only four other kids of her skin color in her class, and Rogers was bullied because of the color of her skin. Although Rogers eventually transferred to another school, she still had a hard time making friends.

“The other kids did not want to play with me or be my friend because of how dark my skin was,” she said “I was now being teased by people in my own race,” she continues. “I was getting called names like ‘burnt biscuit,’ ‘dead roach,’ and was told that I ‘had been left in the oven too long.’ Going through this inspired me to begin Flexin’ In My Complexion, because black comes in so many shades and they all are beautiful.” 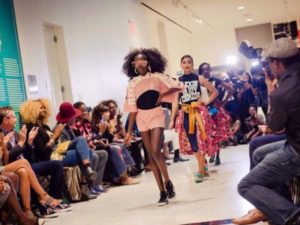 To help spread her message of unity and inclusivity, Rogers decided to show her clothing line during the Harlem Front Raw with three other models in different skin tones. This got the attention of most fashion designers and fashion experts, and it eventually led to an invitation to New York during fashion week. Rogers plans to keep designing for her clothing line, and she says she wants to continue to build the mindset of being proud of the skin they were born with, not matter what color or hue.