Eleven year old Alex had been sent to camp for the summer by his parents. But only after a day at the camp, he decided to use his free time to send a letter to express his feeling to his folks. In the letter, Alex expresses his displeasure because his parents had failed to send with him a box that they had packed for camp. In the letter, he censors himself with asterisks and explains his disappointment with his parents. 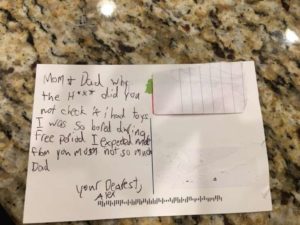 According to Alex’s mother, Simone, she had packed a box that included all his favorite things including playing cards, Legos, yo-yo’s, and even a new book that Alex wanted to read. But the family forgot it at home before they left for camp. So Alex was left to spend his free period in camp drafting this hilarious letter to his parents. In the letter he made sure to make note that he expected more from his dear mother, but “not so much Dad.”. 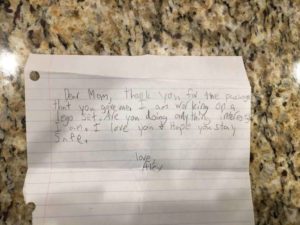 Alex’s mother was also disappointed with herself when she got home from dropping off Alex for camp. When she got to the living room, she found the box sitting there. She knew Alex was easily bored and had packed the box just for those times. Thankfully the camp allowed the box to be sent to Alex. When Alex received the box, he sent another letter thanking his mother. Both letters were posted by Simone on social media where it quickly went viral.