Giving a toast at a wedding can be difficult to pull off. Aside from speaking in front of a lot of people, there are a lot of expectations when it comes to giving a toast in such a big and important ceremony. But in a recent video from America’s Funniest Home Videos, a little girl can be seen taking hold of the microphone and giving an adorable speech that stole the show. 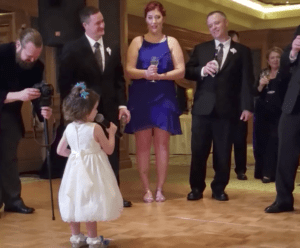 In the video we see the little girl eagerly receive the microphone and stand up front of the bride and groom to give her speech. The chatty little lady gives a rather rambling speech about the story of her birth and how she “always wanted to be four years old”. She struggles at first, but her story is every bit as adorable as her white wedding outfit. She also gets constant encouragement from the people in the crowd. It gets a little shaky at some parts, but she manages to rally in the end and finish her speech with a strong message. 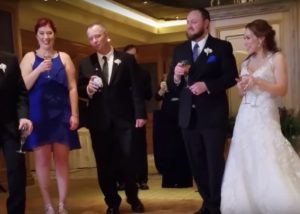 “I love you Kiki and I’m so happy that you got married,” she says as she gets to the part of the speech where she toasts the bride. For the groom, she calls him Uncle Mark and remarks on how she likes his suit and that he “looks beautiful”. At the end of the speech the little girl gets a well deserved ovation and applause from the crowd at the wedding. The video was also posted on AFHV’s social media accounts where it quickly went viral.