In a recent track and field event held in Louisiana, a 101-year old woman named Julia Hawkins ran the 100-meter dash in a little over 40 seconds. The time beat the current certified world record for woman aged 100 and older. The reports say that Hawkins’ record was faster by six seconds. The event took place at the Louisiana State University. Hawkins first comment upon completing the dash was “I missed my nap for this” referring to her afternoon nap that she usually takes at the time of the race. 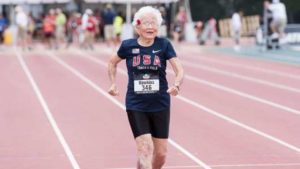 Hawkins only started running when she turned 100. According to her, she started with practice sprints several times a week. Hawkins was an avid bicyclist in the past and her training with that helped her with getting ready for 100 meter sprints. Julia “Hurricane” Hawkins was born in Wisconsin in 1916. Hawkins was formerly a school teacher in the state before retiring more than four decades ago. Now she spends most of her time keeping in shape and spending as much time as she can with her family. 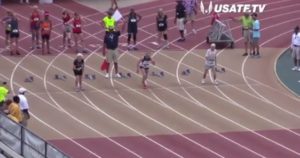 “I’m always outside and the phone always rings, and I come running in is how I knew I could run,” said Hawkins. “Having a momma that can do this pleases them, and it pleases me to please them.” She had her entire family on hand to watch her break the world record. Hawkins has four children, three grandchildren, and one great-grandchild. The race that Hawking participated in had two other participants. And while the much older Hawkins finished last, she was the only one among them that broke a world record.