A senior citizen by the name of Man Kaur has been making headlines by breaking running records despite being the ripe old age of 101. Most of her records have to do with her age and the fact that she still competes and wins races that most people have her age would have trouble finishing. And despite her success, it does not look like she’ll be stopping or slowing down any time soon. 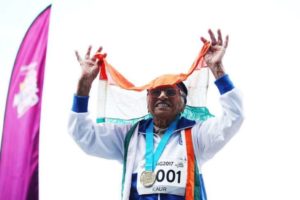 Man Kaur is a great-grandmother of 14. She practices running for an hour every day, with her regimen sometimes including shot put and javelin training. Most times she just practices with sprinting. Kaur started running in 2009 when her son Gurdev Singh, suggested that she take up track and field like him. She enjoyed it so much that her 79-year old son Singh became her coach. Singh trained his mother to run competitively and slowly but surely shaved time off her runs.

When Kaur was ready, Singh signed her up to compete in the same meets that he joined in. Since then Kaur has won an amazing 17 gold medals. Just last year, Kaur won the gold medal for her 81-second 100 meter dash at the Americans Masters Games in Canada. This was also where she broke several records in her age group. Kaur said she isn’t in it for the fame or the money. In fact, she does not receive and prize money from her wins and she often has to pay to enter competitions.

“It is for our health and at this age, we are winning medals, so people also get inspired,” Singh said.