101-year old Mary Hughes is one of the biggest Washington Nationals fans in the world. In fact, before she moved in to her assisted living home in Green Valley, one of the first questions she asked was whether or not they received baseball channels. She also marked in her calendar the games of the team, what channels they are on, and what the final score was. So it was a dream come true for Hughes when she was one of the people selected to be awarded with the Nationals Spirit Award at the home stadium for the team, Nationals Park. 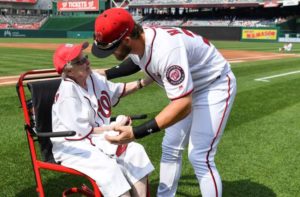 Hughes was always a huge baseball fan. She played softball when she was younger, from 6th grade to 8th grade. Hughes was brought to the stadium with kids and other fans to be awarded. She was wearing the jersey of her favorite player Bryce Harper and a Nats hat. She was brought there by two caregivers from her home. Despite being a lifelong fan, this was the first time she would visit the Nationals home field. In fact, this would be the first professional sporting event that she attended. 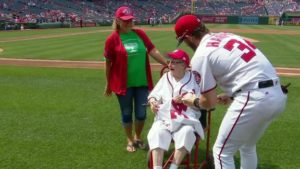 Just before the game started Hughes was wheeled out near the first base line with the crowd cheering. Then Harper appeared from the dugout and went up to Hughes, who had the biggest smile. Harper went over to Hughes and shook her hand. He also gave her a jersey with her name on it, signed her baseball and posed for a few photos before hugging her. Harper returned to the dugout as the game was about to start and Hughes was wheeled back to her seat behind the third base to enjoy her first live baseball game.