A Dallas Native named Orville Rogers decided to celebrate his 100th birthday by running 100 miles with his family. His running has been very much a part of his life, despite starting at the ripe old age of 50. Rogers has been running successfully since then. In fact, Rogers has gained notoriety for winning several age related races. He already has placed first in 16 races. 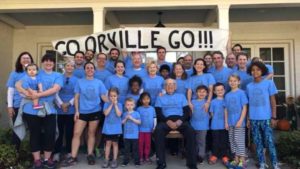 “I’ve been besieged today and I’m enjoying it.” says Rogers, “I can’t describe it,” he replied when asked how he felt running while surrounded by those he loves. “I’ve been on a high now for quite some time. I’ve had about six or seven birthday cakes. I have one more party today and two more tomorrow.”

Despite all of his achievements in running, he says his high point has to be the most recent run with his entire family. The family that ran with him covered a combined 100 miles and included 34 family members across four generations. He is also grateful for all the attention he has gotten. He says his phone keeps ringing from all the calls and messages greeting him for his milestone birthday. 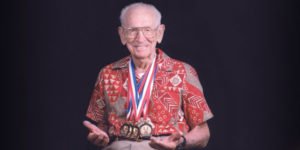 Rogers started running at 50 with just a few miles a day and a few times a week. He gradually added speed and distance over a period of a few years. Soon after that he started competing in marathons. The last time he competed in a marathon was at the age of 72. He says that his days of competing in marathons are over even although he still runs as much as he can.