10-year old boy named Clark Kent Apuada swam the 100-meter butterfly in 1:09:38 at the Far Western Long Course Championship in California. The time is a second faster than the record that legendary swimmer Michael Phelps set when he raced the same race in 1995 in the same category of boys 10 and under. The record hasn’t been touched by 23 years, until Clark hit water earlier this week.

Clark is a Filipino-American fifth grader who has dreams about breaking Phelps’ record. He said he started to dream about it since he started to swim competitively at the age of 7. Clark was awarded by a representative for Pacific Swimming. Clark won first place for all the swimming events that he competed in this year’s Far Western Championships. Pacific Swimming, also known as PacSwim, is a regional association and part of USA Swimming.

“Everyone in the crowd was thrilled when they realized what a special swim they had just witnessed when we announced the long standing record had been broken,” said Cindy Rowland, PacSwim’s administrative director. With a name like Clark Kent, it was easy to pick a nickname for this swimming phenomenon. People have already been calling him the “Superman of swimming”. According to his mother, Cynthia Apuada, the boy has been living up to the nickname during competitions. Some have even said that he could be better than Phelps. 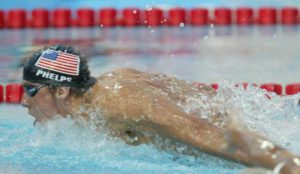 Phelps is a one in a generation athlete and Olympic swimmer. He competed in his first Olympics at the age of 15. He went on to be the most decorated Olympian of all time, winning a record breaking 28 medals, 13 of which are gold.