Kira the Gorilla of the Philadelphia Zoo was pregnant and expecting soon, but when the day finally came, Kira was suffering from a little over 24 hours of labor and had not progressed as far as the vets wanted her to. In fact, she was beginning to get tired and her condition was getting worse. The Philadelphia zoo had to act fast if they were going to save the life of Kira and her baby. That’s when she zoo decided to call in regular doctors to perform emergency surgery. 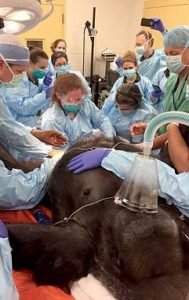 The doctors that the zoo had called in doctors who would be working along with veterinians to perform an emergency surgery procedure with equipment that would be used for human deliveries. After a few hours, the surgery was a success and they were able to successfully deliver Kira’s baby and keep the pair healthy and safe. 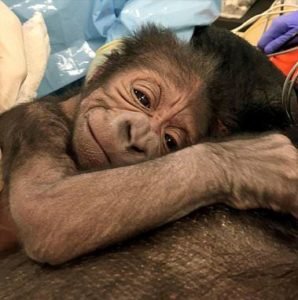 The 17-year old Western Lowland gorilla and was able to deliver a healthy 5-pound baby boy. The infant was taken into care by the zookeepers for 24 hours to make sure it was healthy, and also because Kira was under heavy sedation. Eventually they returned him to his mother. Kira had recovered from her operation by the time the baby was in her arms. Kira has been cradling and nursing the baby gorilla, which is good news for the zoo and Kira’s doctors.

“Though Kira is a first-time mom, we’re not surprised she’s acting like an expert already. She was a great older sister to younger siblings and has been very attentive while our other female gorilla Honi has raised baby Amani,” said Dr. Andy Baker of the Philadelphia Zoo, “Everybody is excited about these two future playmates.”