In the world of professional wrestling, there are a lot of ridiculous and amazing things that can happen inside the ring. While most of it centered around ‘wrestling’, several antics have been known to occur in and around the ring. Fans and critics are used to these antics and the sport is more of a performance than an actual sports competition. But sometimes, real life tends to bleed into the theater, as we just witnessed in the latest Wrestlemania. 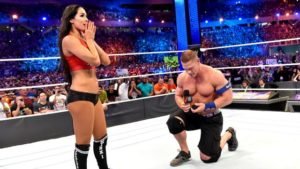 Wrestlemania is one of the WWE’s biggest events, some would even say that it is the biggest even out of the company’s entire calendar. That stage was where wrestler John Cena decided to take a knee and propose to his long-time girlfriend Nikki Bella. In front of more than 70,000, Cena took a mic and told Bella:“I have been waiting so long to ask you this â€¦ will you marry me?” 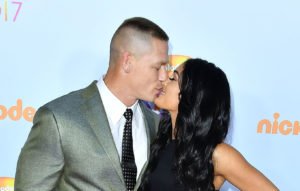 The moment came after the pair won a match against the Miz and Maryse in one of the under card matches of Wrestlemania 33. The couple had been dating on and off for five years, with most of it being filmed in a reality TV show Total Bellas. Cena has been married before in 2009, but was divorced in 2012. John Cena has been one of the biggest superstars in the WWE. Not only is he one of the prized wrestlers that headline most of their shows, but he is also an ambassador of the brand and the sport. While they have claimed that the engagement is true and not part of the show, the couple have yet to divulge a date for their wedding date.