Earlier this week, scientists have discovered what could be the world’s oldest known tattoo. The inked skin was on an ancient Egyptian mummy which has been in display at the British Museum for the past century. In the past, all the people could see from the mummy’s right arm was faint dark smudges that could have been anything. But after an infrared scanning, it was revealed that these marking were indeed tattoos that depicted two animals, a wild bull and a goat-like creature. 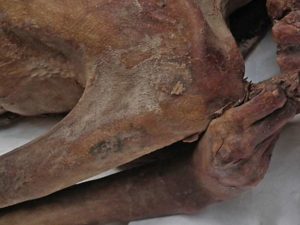 It is likely that the man wore his tattoos as a sign of strength and virility. Both animals were associated with male power and virility. The two animals were tattooed to the man’s skin around 5,200 years ago. An examination of the tattoos suggests that it was made from a carbon based coloring pigment, like soot. The mummies were originally found more than 100 years ago in ancient pre-dynastic Egyptian cemetery at Gebelein in southern Egypt.

The bull in the tattoo represented an extinct giant wild bull called aurochs. They were feared and worshipped throughout the ancient world. The other animal was a goat-like sheep known as a Barbary sheep. This animal was most likely also associated with male virility and fertility. 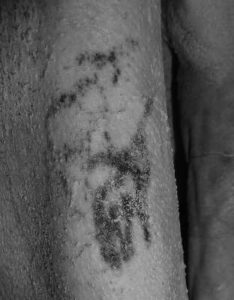 “The use of the latest scientific methods, including CT scanning, radiocarbon dating and infrared imaging, has transformed our understanding of the Gebelein mummies.” said Daniel Antoine, one of the lead authors of the research paper and the British Museum’s Curator of Physical Anthropology, “Only now are we gaining new insights into the lives of these remarkably preserved individuals. Incredibly, at over five thousand years of age, they push back the evidence for tattooing in Africa by a millennium.”