After six years of construction, the Lotte World Tower in Seoul is finally complete. The 555-meter tall building opened earlier this month and set several world records. The tower is now the defining structureÂ on the Seoul skyline and is currently the tallest tower in South Korea, and the 5th tallest tower in the world. The previous tallest building in Korea was the Three IFC Office Towers. The Lotte World tower exceeded its height by more than 300 meters. 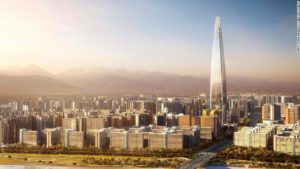 One of the most impressive records boasted by the Lotte tower has to its double-decker elevator, called the Sky Shuttle. The Sky Shuttle is the tallest and fastest double-decker elevator in the world. It is capable of bringing passengers from the basement to the 121st floor observation deck in close to 1 minute. The speed of the elevator is at 10 meters per second. According to experts, it is the fastest elevator in the world. At top of the tower is the observation deck, which is the highest glass-bottom observatory at 478 meters. 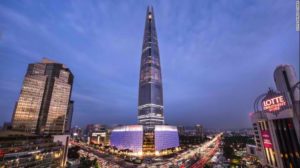 The observation deck of the tower allows visitors to see a wide are of Seoul’s landscape, including the mountainous terrain surrounding the city. The view overlooks the Seoul city and the Cheonggyecheon River, which flows through city. In a clear day, visitors can even see as far as the Yellow Sea on the western front, and you can even see parts of North Korea on the northern front. The Lotte World Tower has 61 elevators, 123 floors, including several shopping complexes, offices and a hotel.