Woman Finds Ring She Lost in Italy 9 Years Ago

When Justin and Margaret Mussel were in Italy nine years ago, they were devastated when they found out that she lost her 1.1 karat diamond engagement ring. The New Jersey couple was in Europe for their honeymoon shortly after they were married. According to Justin, his wife’s ring was a loose fit, and she didn’t realize it was gone until much later. She took a nap and woke up realizing she didn’t have it on. But now, 9 years after losing the precious piece of jewelry, they returned to Italy where they miraculously found the missing ring. 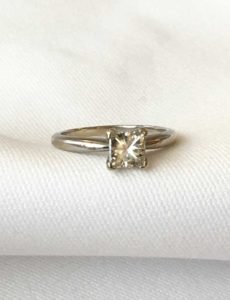 The Mussels were devastated when they lost the ring. They could not use their insurance at the time to get it replaced, because they were out of the country, so Justin saved up for a few years to replace it instead. But 9 years later, they returned to San Marco dei Cavoti where Margaret’s parents own a house. The couple now has two kids and nearly a decade of being married. Then one day, when Justin was just lounging on the porch, he noticed a flicker of light coming out of a crack in the sidewalk. He dug into the crack to see what was in there and was shocked to discover the engagement ring that was lost almost a decade ago. 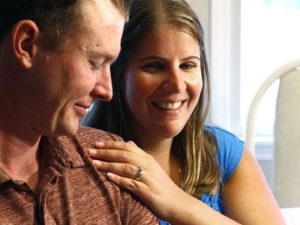 “When he kept saying he saw something shiny, in my head I said ‘he probably thinks that’s the ring,’ and no way would it be there after nine years. “said Margaret,”I thought he was crazy. I was like, ‘There’s no way the ring is in there.’ I couldn’t believe it. I thought he was playing a joke.” But after looking at it more closely, she realized it was the long lost engagement ring. The couple said that they would probably give it to one of their kids if they decided to get married, but in the mean time, the ring will stay with Margaret to make up for lost time.