Woman Finds Handbag in Garage Made out of Gold

There’s a saying that one man’s trash is another man’s treasure. This is literally the case with a woman’s handbag found earlier this week. A woman almost threw out an old handbag that was just gathering dust in her sister’s garage. The bag was just stashed in the garage for seven years and she was about to throw it out with the week’s trash when she found out that the bag was actually made out of gold and was worth thousands of dollars. 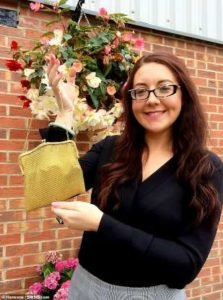 Linda Pritchard from Denbigh, Wales found the chainmail bag in a damp garage in her house. Linda and her sister initially decided to throw out the bag, but at the last second they decided to ask a local optician to check it first. They were shocked to find out that the bag was actually an Art Deco handbag made out of 15-carat gold and worth £3,800. The bag had actually once belonged to a wealthy socialite Dora Jones in the 1950’s. Inside the bag were even photographs and documents showing it was an Art Deco Emanuel Joseph designed bag made in 1913. 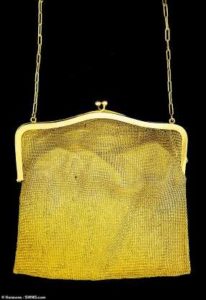 “I used to care for a gentleman called Gwyn Jones and he left the bag to me, which belonged to his late wife Dora, when he died.” explained Linda’s sister, Margaret, “It ended up languishing in a garage for seven years, lost amid personal letters and photos. I kept Mr. Jones’ things in Linda’s garage because I didn’t know what to do with them. They were someone’s personal items. They were there for a number of years until Linda wanted to clear out the garage.”

“One day we went to sort it out and, as things were a bit damp, I started to throw things in the bin. We came across the bag and I just thought we would never use this, so said to Linda ‘get rid of it’. But she kept it. I never gave it a second thought. But later that night, I thought ‘why would Mr Jones keep this, the only thing left from his wife?”