A Twitter user took to the platform for some advice about a creepy and mysterious doll head that was found in her sister's basement. For more proof, she attached a photo of the eerie doll. It was planted into the cement face up so it can look at anyone who enters the basement!

Of course, a lot of people were saying that it was ritualistic or evil and that they needed to get out. Others said it wasn't uncommon for people to leave behind things in the foundation of their homes. Sometimes, it was an accident. Other times, it was on purpose!

People who have built or remodeled their homes sometimes leave time capsules in the foundation. Some users have even shared that they've seen doll heads wedged into random places as well. Someone even saw a doll head molded into the cement at a vacation home that they were renting.

One Twitter user seemed to have a solution to the mystery, saying: "Those are cellar babies. In the late 60s/early 70s it was a trend in both NYC and California to embed doll parts in the walls of your house, including basements. Sometimes items were hidden inside of these as well, including newspaper clippings and (rarely) cash. Take a look." 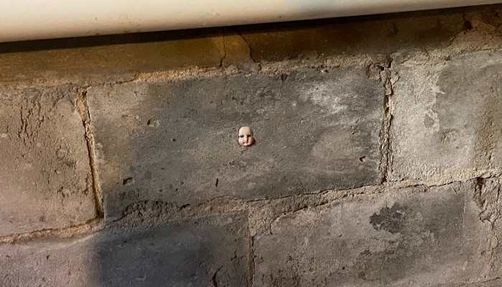 It seems that this Twitter user and her sister don't have anything to worry about except having a creepy doll head living in the basement of the home! It was most likely left behind by a previous homeowner who was a trickster. It's also just as possible that a little girl accidentally dropped her doll while the cement was setting and no one noticed it. Still very creepy, though.