A waitress at a Waffle House restaurant in La Marque, Texas thought that it was just an ordinary day. She took in orders and helped out customers. She even helped out an elderly man to cut his food so he could eat it properly. Little did she know that this small good deed that she provided the old man would end up changing her life for the better. 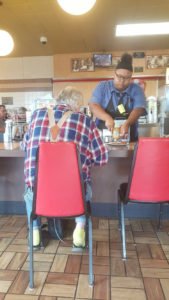 Evoni Williams is an 18-year old waitress at a Waffle house. She recently received praise when she was seen cutting up the food for an elderly customer. The old man had recently undergone surgery and had trouble eating his food. The elderly man also told Williams that his hands didn’t work as well as they used to. He was also using oxygen because he was having trouble breathing.

When Williams found out, she decided to help out without hesitation. She started to cut the food on the man’s plate. Her actions were captured on camera and were posted online where it quickly went viral. Now Williams is being praised for her generosity and consideration. Bobby Hocking, the mayor of La Marquee, even presented a proclamation, which he presented to Williams at the location of the Waffle House. 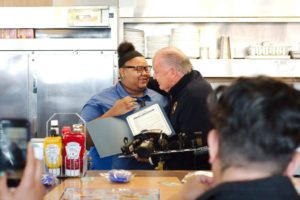 The actions of Evoni also caught the eye of Texas State University. The school decided to surprise her with a scholarship fund worth $16,000 – $4,000 for each of four semesters. It was truly a gift because Williams said she was working at the Waffle House to save up for college.