Hundreds of volunteers in India work together, to remove a staggering 12,000 tons of plastic trash from a beach in Mumbai. This undertaking isn’t done in just one day. In fact these volunteers visit the Versova beach every weekend to remove the trash that has littered the coastline. It has taken a lot of work, but so far, it has made a difference. 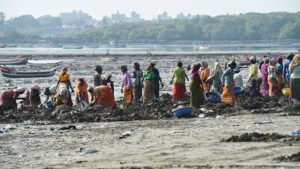 The movement to clean the beach was inspired by lawyer Afroz Shah. He calls the cleaning initiative “Sky Ocean Rescue”. According to Shah, the beach is one of the most polluted in the world.Â  “This beach laps the plastic up,” Shah said, “It acts like a net. You must pick it up or the next high tide will take it out and it will never come back. Then it harms marine life.” 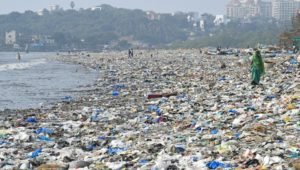 It’s not just India that has these polluted beaches. All around the world there is ocean waste that seems to build up each year. There is an astonishing 5.25 trillion pieces of plastic debris in the ocean according to National Geographic. Of this mass waste, 269,000 tons float on the surface. There is also 4 billion plastic microfibers per square kilometer that litters the deep sea.

This much trash in the ocean waters and in the beaches has deadly consequences on ocean life but also for people. This could potentially pollute the waters that are used to sustain cities near the coast. Thankfully organizations such as Sky Ocean Rescue are trying to do what they can to clean up the oceans and our beaches.