At a farm in Worchester, Britain, is turning ponies into magical creatures known as unicorns. These small horses are groomed, and then they are given pedicures, and have their manes and tails dyes bright colors to simulate what a unicorn may look like. And of course, a unicorn would not be a unicorn without having the signature single horn on its forehead. 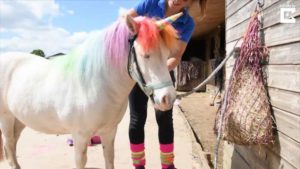 The ponies are being taken care of by Louise Wickens, the head unicorn groomer. The ponies are being pampered each day, and the farm uses a non-toxic paint for dying the hair of the horses. The manes and tails are also braided with flowers and ribbons. Wickens also uses animal-friendly glittery nail paint to color their hooves. Aside from getting the unicorn treatment, all the ponies get the usual care that an animal in a farm house would get, including having their coats combed, and their hooves checked regularly. 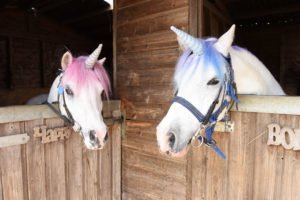 These unicorns are often hired to entertain guests at birthday parties, festivals, and weddings. It’s no surprise that they are most commonly used for little girls’ birthday parties. Emily Woolley, who runs the farm, says that the ponies enjoy all the attention they get when they are dressed up as unicorns. She says that the animals love the fuss and cuddles they get from children. The amount of work these unicorns get depends on the season.

“In the winter it tends to take a lot longer because they’re all muddy and it’s difficult to bath them but we always make sure they’re gleaming by the end,” she said.