A man in Canada known as Uber Rob has been offering free rides to the people affected by floodwaters in the area of southern New Brunswick. Not only is Rob offering rides, but he is giving them completely for free. Rob Dekany, also known locally as Uber Rob, has been ferrying passengers, seven at a time, from Darling Island, a Saint John area, to the mainland. The only access in and out of the island is a road that has been underwater because of flooding from the Kennebacasis River. 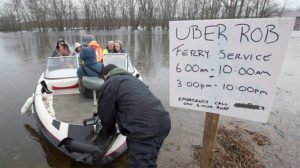 Uber Rob even has a schedule of when he makes his tips. He also has an emergency phone number posted on a sign at the edge of the water so that he can be contacted in case emergency transport is needed. Even with all these services, Dekany refuses any form of payment form the local passengers. According to local reports, 273 households and close to 700 people had registered with the Canadian Red Cross last week.Â  This is to help out the locals affected by the weather in their area. 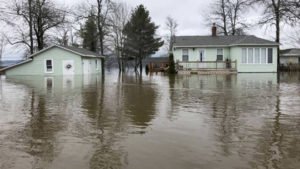 “As you can see I’ve got a bunch of good people here and thought I’d give a hand in good faith and as a good Samaritan,” Dekany said. Dekany makes the trip across the water a few times each day to get people off the island in the mornings, then returns them each late afternoon and early evening. The flooding in the area is expected to continue for the next few days according to local weather reports.