The McDonald’s Shamrock Shake has become an American staple since its inception in 1970. Over the years, the green shake has appeared for a limited amount of time on the McDonald’s menu. It comes in second only to the McRib in terms of its cult following.

Now you see it, soon you won’t. Find a Shamrock Shake near you on our App and get sipping before #ShamrockShakeSZN ends. ðŸ‘‹â˜˜

The Shamrock Shake is essential to the season, and its loyal fanbase excitedly waits for the time of month when it appears on the Golden Arches menu. But did you know it was originally lemon-lime flavored? When the Shamrock Shake originally debuted, it was a combination of lemon-lime sherbert and vanilla ice cream, rather than its traditional minty flavor. 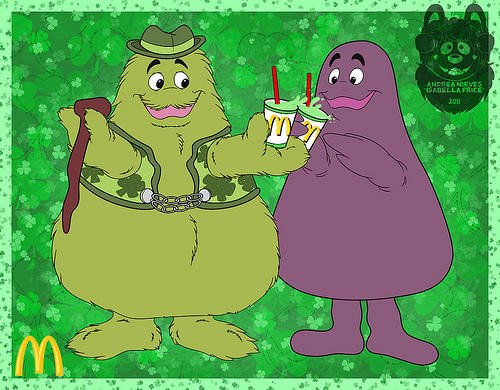 The Shamrock Shake also has its own mascot! In 1975, Uncle O’Grimacey paid Grimace a visit. Apparently, he would take vacations to McDonaldland every St. Patrick’s day to share Shamrock Shakes with his purple nephew.