A five-year-old boy named Jax wanted to have his hair done so it was the same as that of his best friend, Reddy, so that their teacher “wouldn’t be able to tell them apart.”

Lydia Stith Rosebush posted the touching story of her son and his best friend to Facebook and it’s sure to fill your heart with warmth and joy.

This morning Jax and I were discussing his wild hair. I told him that he needed a haircut this weekend. He said that…

“This morning Jax and I were discussing his wild hair. I told him that he needed a haircut this weekend. He said that he wanted his head shaved really short so he could look like his friend Reddy. He said he couldn’t wait to go to school on Monday with his hair like Reddy’s so that his teacher wouldn’t be able to tell them apart. he thought it would be so hilarious to confuse his teacher with the same haircut.”

“Here’s a picture of Jax and Reddy from their Christmas program. I’m sure you all see the resemblance. If this isn’t proof that hate and prejudice is something that is taught I don’t know what is. The only difference Jax sees in the two of them is their hair.”

With the support of his mother, Jax got to do what he wanted and had his hair done so he could look just like his best bud Reddy.

Here’s the photo of Jax with his old hair:

Now, here’s the photo of the two boys side-by-side, this time with the two of them sporting similar hairstyles: 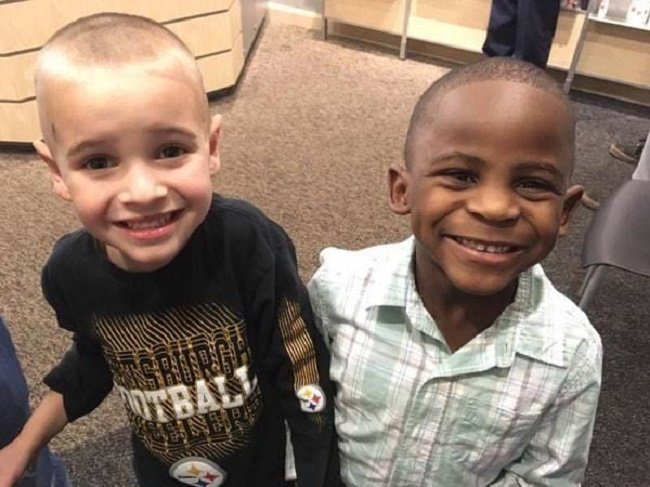 It’s nice to see a new generation of children completely unaware and unaffected by prejudice and all the disgusting things that come with it, which unfortunately are still very prevalent to this day.