This Dog Is Trained to Respond to Harry Potter Spells

American actress and YouTube personality Anna Brisbin, otherwise known as Brizzy Voices, showed off her one-year-old pup’s magical talents on Twitter. The dog is a miniature dachshund named Remus after the wizard Remus Lupin in Harry Potter. Remus was wearing a Gryffindor school uniform and happily followed his owner’s commands issued in the form of spells.

oh, you trained your dog in German? coolcoolcool

i trained my dog in Harry Potter spells. pic.twitter.com/tBlRVTJ33Z

Remus won the hearts of Twitter users across the globe with his talents. He urinates in response to the water-making spellÂ aguamentiÂ and responds to theÂ serpensortia, a spell that summons snakes, by sticking out his tiny tongue. Remus also jumps when toldÂ wingardiumÂ leviosaÂ and plays dead upon hearingÂ avada kedavra. 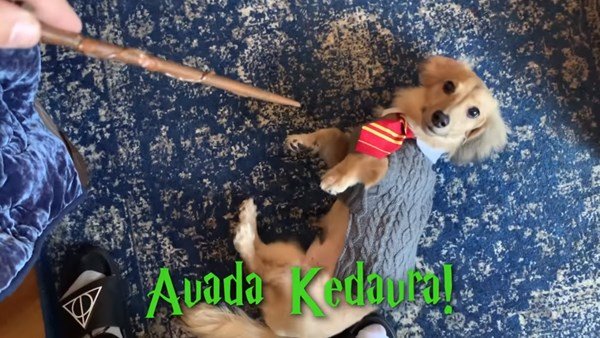 Anna is a diehard Potterhead. “Harry PotterÂ is my everything,” she said. “It’s what raised me and formed me to be the person I am today and inspired my career as an actor.” She also calls her cat, Torrie, a dementor.