The man who broke his neck was saved by his dog

Sometimes life throws surprises at you, a simple everyday chore can turn out to be life-threatening ordeal, this story is about Bob who lives in North Michigan and suffered with an accident, but luckily was well-taken care of by his dog. It was on the cold New Year’s evening when Bob was in his farmhouse and went out to get a log to burn for his fireplace, his wife was out of town, and Bob had his dog Kelsey with him, as Bob was wearing only slippers, and he was going down the stairs he slipped and fell right in front of the stairs. 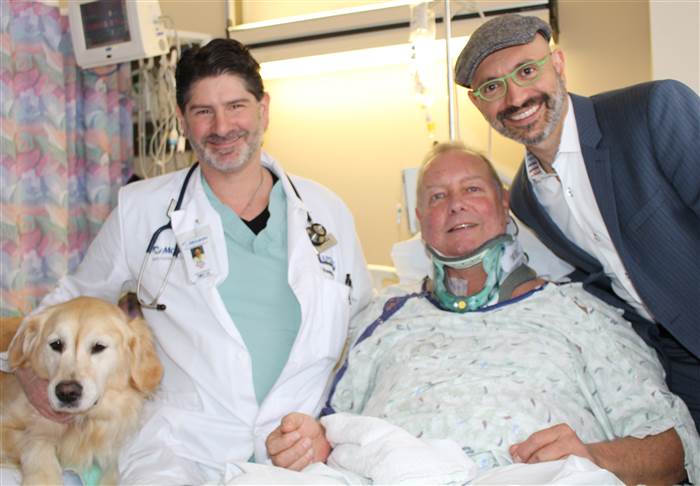 It didn’t take him long to realize that he broke his neck or back, because he just couldn’t move, Bob who’s 64 was lying frozen on the snow-covered ground outside his home. This could be a nightmare for anyone living in the Northern hemisphere, when you’re home alone and you live in a farm house and rest of the houses are too far and away.

Here came Kelsey to rescue Bob, the golden retriever lay on top of Bob’s stomach and chest to keep him warm, and kept licking him, the dog stayed with his owner for nearly 20 hours until help came. The dog’s actions kept him warm and prevented frost bite. Bob was taken to the hospital and was treated for hypothermia, he had broken discs in the back that compressed his spinal cord as he slipped and fell.

Bob so far is doing really well, he’s learning how to climb stairs and has started walking, Bob’s positive mindset kept him conscious during the accident and prevented him to fall in despair, his strong will power and having Kelsey by his side made all the difference. He knew he had Kelsey by his side, so he’s going to be alright, “She’s one smart dog” he says.