A teenager in Oregon dressed up as Spider-Man and hung upside down so that he could ask his girlfriend to prom. The teenager was 17-year old Adam Hazelton. He tied a rope out of the bedroom of his girlfriend and hung upside down while wearing a Spider-man costume, just so that he could ask her, Â 17-year old Jenna McIntosh, to the prom. The scene was recorded and posted by McIntosh on social media, where it quickly went viral.

Aside from the stunt of dressing up as Spider-man and recreating his iconic upside down move, Hazelton also had a sign with him that said “It would be MARVELous to go to prom with you.” Adam initially asked Jenna to come outside. But Adam had to wait seven minutes before Jenna came out forcing him to wait longer than expected while upside down. Thankfully Hazelton was able to hang on that long and wait for McIntosh so he could ask her out. Jenna said yes to his question. 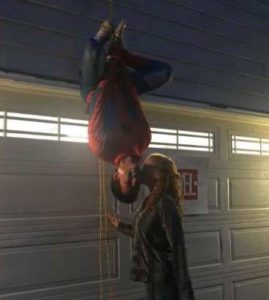 “I knew he was going to ask me but I never expected him to literally be hanging out of his window!” McIntosh said, “I was so shocked.” Hazelton practiced how to hang upside down from the rope at the local gym in preparation of the stunt. The famous upside down Spider-man scene was made famous by the first Spider-man movie in 2002 starring Toby McGuire and Kirsten Dunst. In the movie, the Marvel superhero Spider-man hangs upside down and kisses his high school sweetheart Mary Jane Watson while hanging upside down with webbing.