Earlier this week, a couple decided to take their prom pictures at a local fast food restaurant. Â Riley Papile and her girlfriend Abby Creneti wanted to do something to remember their prom, and so the two Hatboro-Horsham High School seniors decided to hire a photographer, Rachel Beck, and take photos at the local Taco Bell. 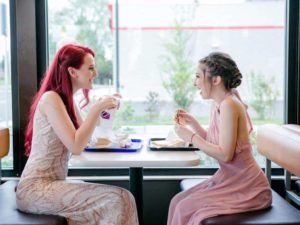 The couple decided on the spot because they were both fans of the fast food joint. They got some weird looks form the people inside the restaurant, but they didn’t care because they were having so much fun. They also asked the employees if it was okay to take pictures, and they said they were cool with it. The afternoon of taking pictures eventually interrupted with a snack. 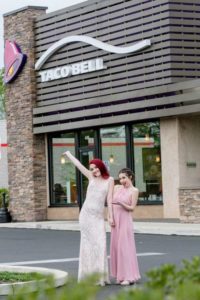 “We started outside the building and several of the employees came outside to see what we were up to. They thought it was pretty funny,” said Papile, “It was super funny because I’m a familiar face to many of the employees there, so they were all laughing. My girlfriend Abby and I got a lot of weird stares from the customers because we were in the middle of a fast food restaurant in gowns.”

They were going to spend the entire day there and take more pictures, but the restaurant eventually filled up with people who wanted to get a bite to eat. “It got busy right as we were about to take more photos, otherwise we would have taken a whole group shot of us and all of the employees,” Papile explained.