Strangers from all over the world send their art to a 7-year old named Dexter Liebow from Bristol, England. Dexter is suffering from cancer and he says he gets his strength from the art sent to him as he goes through chemotherapy treatments at the Bristol Children’s Hospital. Dexter is a big fan or superheroes and superhero movies, and he is surrounded by several paintings, drawings and art of his favorite superheroes. 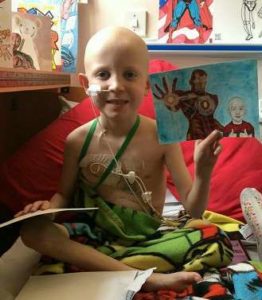 “For Dexter to wake up to a letter or a parcel or a picture, I can’t stress how much it breaks up his day and gives him something to look forward to,” says Dexter’s mother 34-year old Lucy Liebow, “It lifts his spirits and makes a world of difference. He loves superheroes so a lot of the artwork has been related to that, which he loves. It really cheers him up. It’s lovely how selfless some people can be.”

Last October, Dexter started to have stomach aches. After bringing him to the doctor, they discovered that it was neuroblastoma that had spread to other parts of his body. Since the diagnosis, Dexter has gone through 16 rounds of chemotherapy to treat the cancer. His mother says that he is isolated a lot and only gets satisfaction from artwork of his favorite heroes. 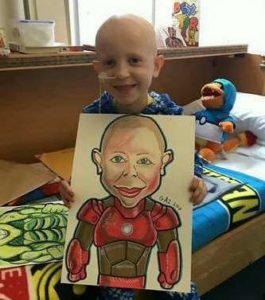 When local fundraiser Linda Buckman heard the story of Dexter, she placed an online ad for artists to send in their work for Dexter. Since then several artists from all over the world has been sending Dexter their art. So far, his favorite piece has been a Guardians of the Galaxy painting by a local graffiti artist.