Keaton Tilson enlisted last year as a 19-year old recruit. HeÂ was stationed Fort Hood, Texas, and had to spend most of his 8 months in enlistment there alone. So when Tilson found out that he would be getting four days off on the Memorial day weekend, he decided to try his luck with a trip home and spend some time with his family. His first call was to his mother telling her the good news and asking her not to tell anyone of the surprise. And because he was a new recruit, he also had to ask his superior officer. 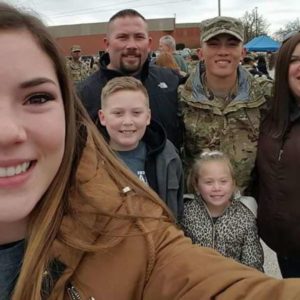 Since Tilson was barely a year in service, he had to get a direct approval from an officer. Thankfully, a day before the holidays hit, he was granted permission. But with only a day, it was cutting it too close to buy an affordable ticket. He had to wait for a seat to open up at the Dallas Fort Worth International airport. Tilson knew he would have to spend the night there and hope for some luck in getting an early ticket home. It looked good at first but seats never seemed to be availableÂ at the right time. 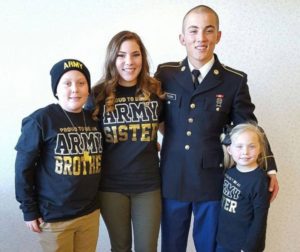 It was getting late, and no tickets were coming his way. Then a kind stranger named Josh Rainey approached Tilson as offered his ticket to the soldier. But the pair was told that they weren’t allowed to switch tickets because it had been too close to boarding time. Disappointed again, Tilson thanked Rainey for trying. But then after a few minutes, Rainey returned and offered to pay for Tislon’s $375 ticket so he wouldn’t miss the weekend with his family. Tilson was shocked and overjoyed at the news. In fact, just before boarding the plane, Tilson found Rainey to give him a big hug.