One of Hollywood’s most iconic scenes is in ‘The 40-Year-Old Virgin’ when Steve Carell painfully screams out, “Kelly Clarkson!” while getting that wax!

The best part was that heÂ really was getting his chest waxed, so he must have used that pain to conjure up something… random to say.

Finally, this year at the Golden Globes, the two met. Carell was on Jimmy Fallon’sÂ “The Tonight Show” when he spilled the beans on their encounter. 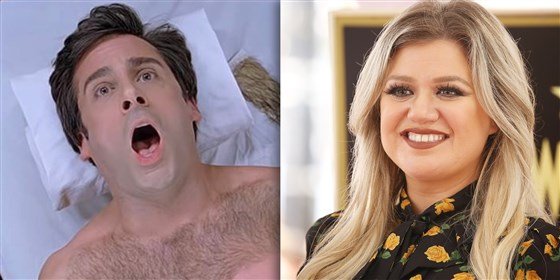 “My wife and I saw her (at the Globes) and my wife said, ‘There she is!’ And we had to go over and we kind of accosted her and said, ‘Hi, we’ve never met but I really wanted to introduce myself,” he recalled. “She could not have been nicer.”

Obviously, this wasn’t the first time the either of them had talked about the scene.Â In 2017, Clarkson told TODAY that she wasn’t sure how to feel about it! She did think it was “pretty hilarious.” But, she also said, “I have yet to meet Steve Carell and I want to be like, ‘So was it a compliment?’ I don’t know â€” if you’re in pain and you think of Kelly Clarkson …”

One of my favorite moments of my life! I love you and your lovely wife! #ahhhhhhhstevecarell https://t.co/oCl6wiSRoj

After 13 years, we finally got the interaction we’ve always wanted! The best part? They were both huge fans of one another. Two worldsÂ finally colliding!