Christmas is one of the most loving and warm holidays of the year; that is unless you are spending it alone. Spending the Yuletide season alone can be even lonelier and sadder than at any point during the year. So when a young single mother overheard another woman saying that she hates this time of year because she feels lonely, she decided to do something about it. 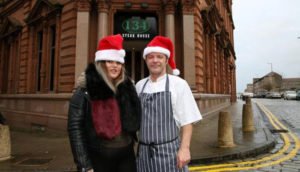 The mother, Taylor Barnes, of Greenock, Scotland, organized a Christmas dinner for at least 60 strangers that included a three course meal, live music, and even Christmas presents. She launched an appeal online and offered the dinner to people who would be spending the holidays alone. She was soon showered by responses. And then the owners of a local restaurant saw what she was doing and offered to host and cook for the dinner party. 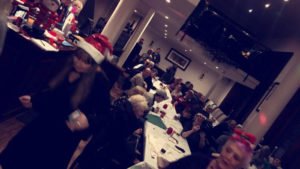 “I had been thinking about Christmas Day, because me and my wee girl were going to be lonely this year as I don’t really have support,” said the 22-year old Barnes. “Then I heard this woman saying that she hates this time of year because she remembers how lonely she is. I was quite upset. I couldn’t sleep that night. I went online looking for ideas of what I could do. Then the idea for the Christmas dinner just popped into my head. I thought it would be great to have a community event to bring other people who will be on their own together.”

“We even had a singer come along so people were having a singsong and a dance,” Barnes said. “People donated all the stuff, so it was a real community effort. There are a lot of really good people out there.”