Paolo Bombelli, who was the lead author on a paper published in Current Biology, was able to discover a caterpillar, known as a wax worm, that is able to eat through plastic. The worm, known officially as Galleria Mellonella, is often used as fish bait and is also considered as a pest by beekeepers, as it eats through beeswax. Bombelli, who is a bee keeper himself, was puzzled one day when he saw holes in plastic bags where he placed wax worms. 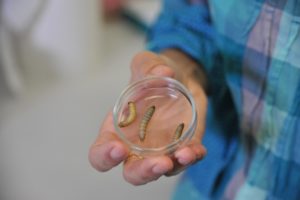 At first Bombelli thought that the plastic that was used was biodegradable, but after a few more tries with non-biodegradable plastic, he found out that the worms were eating through it as well. It was then that he decided to study the worms further. A probe by the Institute of Biomedicine and Biotechnology of Cantabria and the University of Cambridge studied how 100 wax worms would react to an ordinary supermarket plastic bag. In under an hour, holes started to appear on the plastic bag. In 12 hours, the plastic bag was reduced by 92 milligrams. 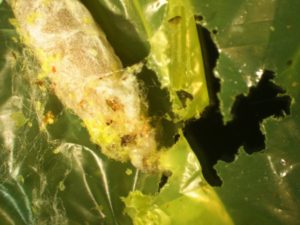 While the process of how the worms consume the plastic is not understood, scientists assume it has something to do with an enzyme that also helps the worms consume beeswax. The wax in beehives has a similar chemical composition as plastic bags. This discovery could be the start in a solution for getting rid of plastic that has polluted our planet. In a recent 2015 study, it was found that there are 275 million tons of plastic created since 2010, with more than 80 tons of it being thrown in the ocean.